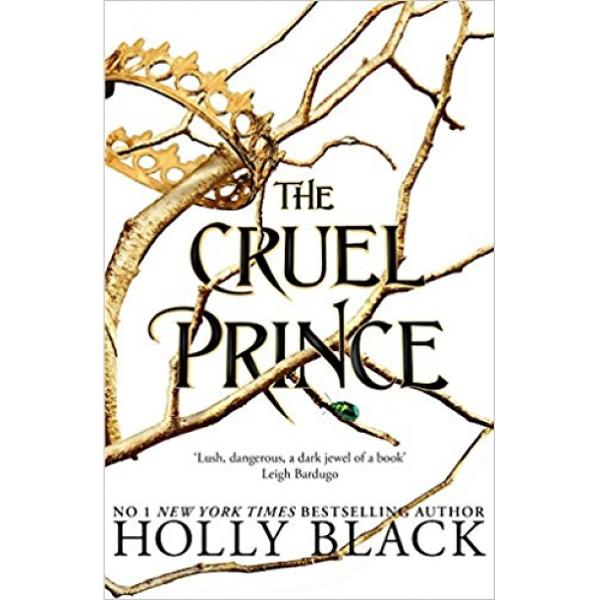 Cruel Prince (Folk Of The Air 1)

'Holly Black spins a thrilling tale of intrigue and magic in her newest novel... Unmissable for fans of Sarah J. Mass and the Grisha trilogy' - Buzzfeed UK

Of course I want to be like them. They're beautiful as blades forged in some divine fire. They will live forever . . . And Cardan is even more beautiful than the rest. I hate him more than all the others. I hate him so much that sometimes when I look at him, I can hardly breathe.

One terrible morning, Jude and her sisters see their parents murdered in front of them. The terrifying assassin abducts all three girls to the world of Faerie, where Jude is installed in the royal court but mocked and tormented by the Faerie royalty for being mortal. As Jude grows older, she realises that she will need to take part in the dangerous deceptions of the fey to ever truly belong. But the stairway to power is fraught with shadows and betrayal. And looming over all is the infuriating, arrogant and charismatic Prince Cardan . . .


Lush, dangerous, a dark jewel of a book. Black's world is intoxicating, imbued with a relentless sense of peril that kept me riveted through every chapter of Jude's journey. And Jude! She is a heroine to love--brave but pragmatic, utterly human. This delicious story will seduce you and leave you desperate for just one more page (Leigh Bardugo, #1 New York Times bestselling author of Six of Crows and Crooked Kingdom)

Stands out amid a plethora of fairy-court fantasies . . . Complex, nuanced characters, frank sensuality and thorn-sharp, intricate storytelling all conspire to ensnare. (Guardian)

Whatever a reader is looking for-heart-in-throat action, deadly romance, double-crossing, moral complexity-this is one heck of a ride (Booklist)

I am awarding this book 5*/5 with no hesitation - it was lively, gripping, exciting, and had some amazing plot twists which kept me turning the pages (Sammy's Shelf)

It's only a week into 2018 and I've already fallen in love with a new author, Holly Black. I know I'm extremely late to this party, but wow her books are good. If you like faeries but also messy and complicated humans, trust me you'll love her! (What Rhi Read)

In this story Holly Black has once again proved why she is known by some as the 'Queen of Faerie' because she successfully creates a dark, twisted world inspired by the old folktales where the fae are capricious and cruel, yet sets it alongside a modern world that feels all too familiar (Chrikaru Blog)

Holly Black creates an enticing world that's as sinister as it is appealing, and a heroine more than equipped to manoeuvre within. Impossible not to enjoy. Shadowhunters fan should read this at their earliest opportunity (SciFi Now)

A veritable queen of dark fantasy, Holly Black spins a thrilling tale of intrigue and magic in her newest novel. Ten years after the faeries murdered her parents and stole her away, 17 year old Jude is fighting to be accepted by her captors. Unmissable for fans of Sarah J. Mass and the Grisha trilogy (Buzzfeed UK)