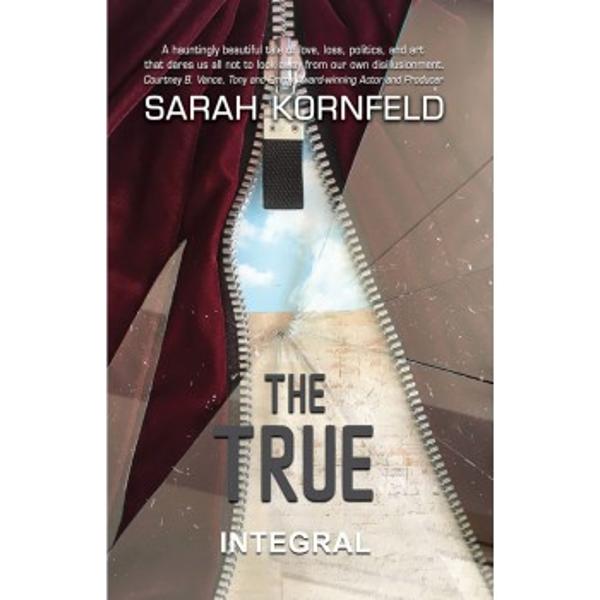 “A Trilogy of Ghosts” is a composite of three books called THE TRUE.

In 2019, world-renowned Romanian theater director Alexandru Darie died, the news shocking the creative world. Bringing Darie and Romania vividly to life, The True also tells the story of one courageous woman’s cutting through a con artist’s web of lies that mirror global corruption.

The True is a hybrid of memoir, true crime, autofiction. Editura Integral is publishing the book in three languages (Romanian, English, and French). The True will have a rolling launch (October 28, 2021 for the Romanian and English. November 25, 2021 for the French) with the box-set of all three books released December 9th, 2021. The box-set is titled The True: A Trilogy of Ghosts. The book has three different endings, each translation an extension of the chaos of Kornfeld’s experience.

Kornfeld and Darie had been lovers in the 1990s but remained very close friends after breaking up. When he died, Kornfeld went to Romania to search for the reason for his death. It was there she met a young Romanian woman who claimed to have been Darie’s girlfriend. Over a two-year period, Kornfeld wrote a book about Darie’s death, signed deals with Netflix and Disney for scripts about Darie (and other projects), all to devastatingly discover she had been deeply misled by a con artist.

Readers of Anne Carson, Claudia Rankine, and Chris Kraus will love The True. In a post-truth world where objective standards for truth are disappearing, The True limns the slippage between facts, opinion, and belief. Informed by her early life within the experimental theater of downtown New York, Kornfeld draws on a wellspring of language from Molière to Patti Smith, Beckett to Maria Irene Fornes, and the intimacy of defiant theater friends and family.

PRAISE FOR THE TRUE

The Trueis Sarah Kornfeld’s personal exploration of grief and loss. What begins as an examination of a long ago love affair masterfully propels into a page turning thriller. Raised in the theater world Kornfeld plays right into the theatrics finding herself center stage struggling to decipher fact from fiction. A hauntingly beautiful tale of love, loss, politics and art that dares us all not to look away from our own disillusionment. Culminating with a crash and return that reveals while the world perhaps is not as grand as it once was, love even in death, may be the only truth that lives on."

Courtney B. Vance, Tony and Emmy Award-winning Actor and Producer

Sarah Kornfeld’s The True is a gorgeously written twenty‑first century postmodern literary work convincing us that we only truly know where we are when on the wrong side of the looking glass. Passion, politics, lust, and theater drag us between the surreal and the real, on both sides of the Atlantic. This is a “now” age romance‑political thriller. Kornfeld forces us to weigh what we hate against love, or at least find the middle ground between them, in order to fully live.

Storytelling is a contract of trust between speaker and listener–the promise that the suspension of disbelief will be rewarded with deeper truths encoded in fiction. But “in this time of virtual lives”, Kornfeld warns, such trust is easier to manipulate than ever, and the magic of theater degenerates into propaganda and psychosis. (…)

Kornfeld is humbled to discover how anyone, regardless of political beliefs or intellectual sophistication, can cling to wishful thinking as a defense against personal and historical trauma.

THE TRUE is a funny, tragic, essential cautionary tale for our post‑truth era.

Jendi Reiter, Author of An Incomplete List of My Wishes: Stories

Intimate, funny and page‑turning, The True simultaneously expresses the ways in which we are haunted by memory and the ways we continue to con ourselves. What starts out as a love story that transcends time becomes a paean to the world of theater set against the backdrop of the AIDS crisis and crumbling Romania. This book has everything: romance, Ceaușescu, Diana Ross. Interwoven throughout, the terror and pathos of being Jewish in Europe. The long tail of the Holocaust, the (c)overt antisemitism that still comprises common parlance. What does it mean to be a Jew searching for a Jew? What is Jewish identity? What is identity? Kornfeld’s lucid prose cuts close to the heart and lends an immediacy to the whole crazy story as we watch everything unravel. The downward spiral has such a tentacular pull. I couldn’t put the book down!

The True  evocatively limns the insubstantiality of the “they”: the vestiges of the self and multitude in the virtual realm; the hauntings of the living and the dead, of the past, present, and future, of the real versus the unreal; the liminality of lyings to oneself, of identity creation and fraud in many iterations. Here, the present is as mysterious as the future is uncertain, the past interrogatively tincturing everything. Memoir, mystery, and double‑Künstlerroman collide and blur as the text deeply engages Romanian political and social histories and their intertwinings, moreover time and timing, the art of creation, the reel and unreal of real life, of people as shadows, shadows as people.

Evocatively navigating readers within, through, and past the “frozen falseness” of unfamiliar places and spaces, gardens that “smell of death”, the desert of desertion, the “wet loss of time”, the “broken, craven, honest edges (of death)”, you paint portraits of a troubled confidence woman, and a (mis)leading man from “everywhere”, you, like him, listening to and ventriloquizing voices within and without. Have I mentioned the engaging intertextuality (Bulgakov, Shakespeare, and Molière), and your marvelous miniatures of cities (Bucharest, New York City, and San Francisco)? “We were the madness”, “death can make you cleave to life”, “What if nothing was real?” you knowingly write.

Matryoshka doll or mise enabîme or both, The True: A Trilogy of Ghosts is a haunting, and, like the best hauntings, is as moving as it is harrowing.

The True is a compelling, troubling, and painfully honest story about the world we live in now–a world of fake news and alternative facts in which we believe what we want to believe and ignore or deny those nagging voic­es that tell us otherwise. It’s also a story about theatre–that most ancient art of dissembling; a world of artifice in which nothing is quite what it seems, but where deception is deployed in search of profound truths. And it is also a story about Romania, and about the twisted western view of that troubled eastern nation. Our narrator travels there in search of her undead lover, with Bucharest standing in for Transylvania, and bloodsuckers lurking at every turn. But in Kornfeld’s deftly woven tale, there is sympathy even for the devil. The True lures the reader in with its dark poetry, and then refuses to let us go.

of the 1960s Off-Off Broadway Movement

Sarah Kornfeld is an American writer born and raised in the experimental theater of New York City, where she performed with The Bread and Puppet Theater, Judson Poets Theater, and The Ridiculous Theatrical Company. She is a graduate of Sarah Lawrence College and received professional training at The Royal Court Theater in London. Her play, THE LOVEDEATH OF CLOWNS was produced at the Theater For The New City in New York. Her debut novel, WHAT STELLA SEES was published by Cove International Publishers in 2018 and received high praise in the United States and the United Kingdom. She is a proud member of the National Writers Union, and lives by the sea in the Bay Area of California.