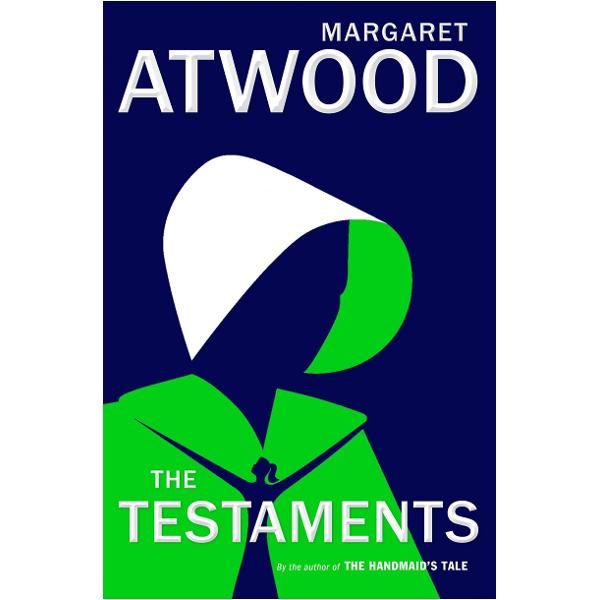 Margaret Atwood’s dystopian masterpiece, The Handmaid’s Tale, is a modern classic. Now she brings the iconic story to a dramatic conclusion in this riveting sequel.

More than fifteen years after the events of The Handmaid’s Tale, the theocratic regime of the Republic of Gilead maintains its grip on power, but there are signs it is beginning to rot from within. At this crucial moment, the lives of three radically different women converge, with potentially explosive results.

Two have grown up as part of the first generation to come of age in the new order. The testimonies of these two young women are joined by a third voice: a woman who wields power through the ruthless accumulation and deployment of secrets.

As Atwood unfolds The Testaments, she opens up the innermost workings of Gilead as each woman is forced to come to terms with who she is, and how far she will go for what she believes.

‘Dear Readers: Everything you’ve ever asked me about Gilead and its inner workings is the inspiration for this book. Well, almost everything! The other inspiration is the world we’ve been living in.' Margaret Atwood


‘The literary event of the year.’ Guardian

‘A savage and beautiful novel, and it speaks to us today, all around the world, with particular conviction and power… The bar is set particularly high for Atwood and she soars over it’ Peter Florence, Booker Prize Chair of Judges, Guardian

"The Testaments is Atwood at her best, in its mixture of generosity, insight and control. The prose is adroit, direct, beautifully turned. All over the reading world, the history books are being opened to the next blank page and Atwood’s name is written at the top of it. To read this book is to feel the world turning" (Anne Enright Guardian)

"A work of brilliant and searing defiance" (MJ Hyland)

"I gobbled it down... Atwood has an incredible intellectual nimbleness that challenges us constantly and poses the question that lies like a pearl inside the shell of this frighteningly readable novel "Before you sit in judgement, how would you behave in Gilead?"" (Allison Pearson Sunday Telegraph)

"Finding hope in a hopeless place, this is everything The Handmaid’s Tale fans wanted and more. Prepare to hold your breath throughout, and to cry real tears at the end. My book of the year" (Kayleigh Dray Stylist)

"It is an addictively readable, fastpaced adventure... the rhyme of reality with fiction is loud and devastatingly clear... In The Testaments, Atwood changes the emphasis of the plot, to strike a note of optimism – a hopeful reminder that resistance is possible and such regimes do eventually always fall" (Holly Williams Independent)

"While unflinching in depicting horror and showing how complicity enables the collapse of compassion, The Testaments is also a clarion call to hope, resistance and activism... The Testaments is a formidable achievement that will doubtless be read in decades to come" (Anita Sethi i news)

"Atwood’s prose is as powerful as ever, tense and spare... I finished in six hours flat" (Laura Freeman BBC.com)

"The oppressed feminist shriek of the first novel gets its more optimistic echo in The Testaments... has the dramatic thrust and power to scorch the memory" (Serena Davies Daily Telegraph)

"The book may surprise readers who wondered, when the sequel was announced, whether Atwood was making a mistake in returning to her earlier work. She has said that The Testaments was inspired by readers’ questions about the inner workings of Gilead, and also by “the world we’ve been living in.” But it seems to have another aim as well: to help us see more clearly the kinds of complicity required for constructing a world like the one she had already imagined, and the world we fear our own might become" (Jia Tolentino New Yorker)

"The very act of writing or recording one’s experiences, Atwood argues, is “an act of hope."... in testifying to what they have witnessed, Offred, Nicole, Agnes and, yes, Lydia are leaving behind accounts that will challenge official Gileadean narratives, and in doing so, they are standing up to the regime’s determination to silence women by telling their own stories in their own voices" (Michiko Katutani New York Times).